A day in the life of a flight education student

The plane ascends, gently rising above the suburbs of Columbus. The horizon is cloaked by a hazy mist, and semis the size of ants crawl along the highway below. The only noise in fifth-year aviation student Saeesha Pimplikar’s ears is the roar of the engine and the occasional communication from air traffic control. Otherwise, it’s just her and the sky. 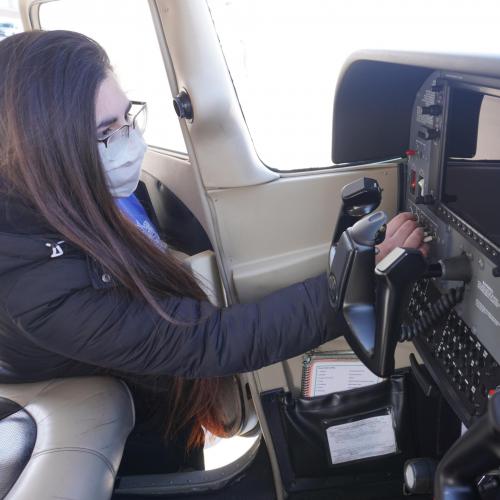 For students like Pimplikar, moments like these come every day. Aviation students at The Ohio State University typically start flying in their second semester, Pimplikar said. “I like the way Ohio State does it,” she said. “They don’t just throw us into a plane where we have no idea what’s going on.” Instead, students learn the basics in a ground school course (AVN 2100: Fundamentals of Private Pilot Flight) before their first flight. After that initial semester, aviation students sign up for a flight slot that they commit to for an hour and a half, five days a week. It’s during these hours that students get to spend time in the air, doing what they love most.

Because it contains a fixed-base operator, the Ohio State airport has everything a student could need: a dedicated flight education hangar, three runways and multiple flight simulators to practice on. The service that really sets flight training at Ohio State’s airport apart is the control tower. State Tower rises above the terminal, providing students with pivotal practice communicating with air traffic control. Those who wish to build a career in aviation will need to learn these communication procedures, so Ohio State’s program, according to Pimplikar, is a great way to get an introduction at a somewhat smaller airport first.

In addition to her daily flight slot, Pimplikar juggles the coursework for 12 credit hours of classes, including the aircraft dispatch minor. She says the most challenging thing about the program is that she had to learn the basics from scratch. “If you're a chemistry major, you've been taking chemistry classes for years, but with aviation, it feels like a whole different ball game.” It’s a big time commitment, and it takes dedication and perseverance. 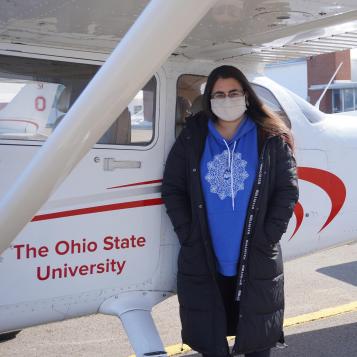 Because of the challenge, Pimplikar’s advice to potential aviation students is simply to “go for it! Don't have one foot in, one foot out. Make sure that you're able to be committed to it.”

If you decide to dedicate yourself to the program, it will be worth it. “I get to fly planes every single day! Not a lot of people get to say that.” Pimplikar grins, her excitement evident. “And I'm a lot better at flying than I was just a couple of years ago. Being able to see that progress is incredibly rewarding.”

Pimplikar is working toward her commercial certificate, which will allow her to enter the workforce as a pilot. She is still deciding what she’d like to do after her upcoming graduation. Until then, she’ll spend her days in the air over Columbus, practicing her passion.