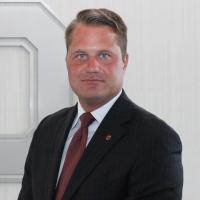 Adam Wolf has been promoted to director of The Ohio State University Airport, effective August 1, 2020.

In this position, Wolf will oversee both the strategic development and day-to-day business operations of the airport. His responsibilities include ensuring that the airport is positioned to provide quality service to customers, tenants and other users. Organizationally, Wolf’s charge extends from airfield operations to fixed-based operations, including the implementation of associated capital projects.

“Adam has established himself as a solid contributor, volunteering his time for improvements and helping foster a positive work culture,” said Stephanie Morgan, executive director of the Air Transportation & Aerospace Campus. “Our leadership in the College of Engineering is confident that under his guidance our airport will maintain and exceed its reputation as one of the nation’s premier places to fly.”

Wolf joined the university airport in 2017, advancing through positions in the airfield operations and business development units. Most recently he served as interim airport director. Prior to Ohio State, he spent three years at the Port Authority of New York and New Jersey at both Teterboro and Newark airports. After moving with his family to Columbus, he assumed an operations role at Columbus Regional Airport Authority.

“I am humbled and excited to accept the position of director at The Ohio State University Airport,” said Wolf. “I look forward to continuing to put all of my efforts to support the mission of the airport and flying public to deliver the highest possible experience while traveling through KOSU.”

A private pilot with instrument rating, Wolf is a certified member of the American Association of Airport Executives (AAAE) and has served on the Transportation Research Board’s Airport Cooperative Research Program (ACRP). He also holds a UAS 107 license and earned a bachelor's degree in aeronautics from Embry-Riddle Aeronautical University.