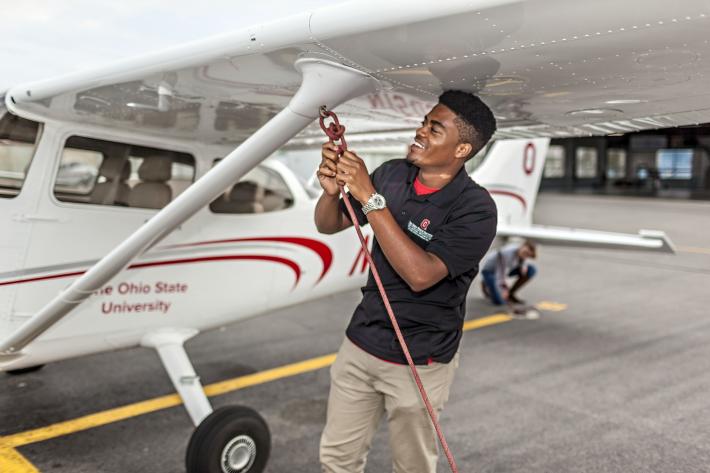 Aircraft are not the only thing taking flight at The Ohio State University Airport this semester. The airport’s Flight Education numbers are soaring. High enrollment, expeditious aircraft maintenance and fair weather have resulted in significant hours clocked in the sky.

In September and October Ohio State Flight Education students spent 1950 hours in flight, an increase of 29% from the same period in 2018.

Director of Flight Education Brandon Mann is enthusiastic about the accomplishment. “To say the least, September and October were great months for the flight school! This is the highest number of flight hours we have achieved in the past 15 years.”

Growth in the airline industry has boosted enrollment in flight programs across the nation.

“Just over 100 new students joined the aviation program this academic year, which is the largest incoming class we’ve had in decades,” said Brian Strzemkowski, assistant director of Ohio State’s Center for Aviation Studies. “The vast majority of these students have aspirations of becoming professional pilots.”

The other factors impacting this semester’s success—expeditious maintenance and fair weather—have also been key to the increased hours in the sky.

“Thanks to the fast turnaround time of airport’s Aircraft Maintenance team, our aircraft were able to get in and out of the shop quickly from their FAA-required maintenance inspections and back onto the flight line,” commented Mann.

Fair flying weather throughout much of September and October helped drive students’ flight hours. Federal regulations limit flight training to visual flying (flying by sight rather than by instruments) for students rated for non-instrument flying, so low visibility days make for quieter runways at the university airport.

The impact of enrollment, expeditious maintenance and fair weather can be seen in the number of operations reported by the air traffic control tower located at the airport. Over 10,000 operations were reported in September and over 11,000 in October.

“We’re extremely pleased with our flight school numbers so far this semester,” commented Stephanie Morgan, executive director of the Air Transportation & Aerospace Campus. “Students are our number one priority at the airport and we aim to do as much as possible to ensure their success.”

Students from any major are welcome to apply to join the flight education program. Those interested in Ohio State’s Flight School should visit the Flight Education website to learn more.