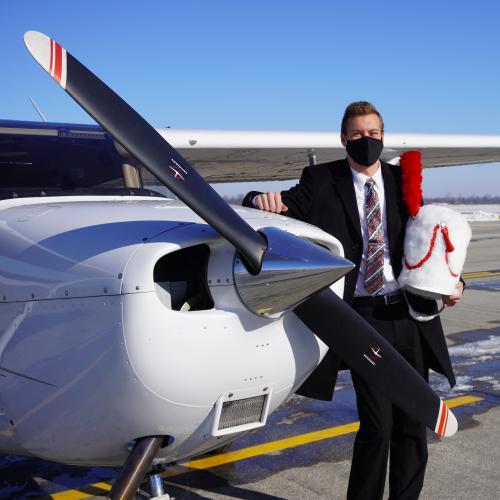 As Ohio State fans, we’re all aware of the pure excitement and pride we feel at the beginning of football games, when the marching band performs Script Ohio and the drum major does his iconic backbend. Whether in the stadium or watching from home, the routine gets our hearts pumping and ready for kickoff.

This year’s head drum major, Brayden Deemer, feels the same adrenaline rush, but not just on the field — Deemer is an air transportation major, and his adrenaline spikes when he’s flying planes just like it does when he’s marching across the field.

Deemer is a third-year from Howland, Ohio and is leading the band through the 2020 season as its 63rd drum major. His role is different from any other drum major in history, guiding band members through virtual, socially-distanced performances. The pandemic altered Deemer’s course in both his band and flight training, but he hasn’t let it disrupt his commitment or passion for either.

Deemer is currently working towards his Professional Pilot Certification with the Center for Aviation Studies. Through the center’s industry partnership, he hopes to join Envoy Air’s Cadet Program after graduation, eventually going on to fly widebody aircraft for American Airlines. Deemer started flying in January of 2020, with The Ohio State University Airport being his home base ever since.

“My first time taking off and landing a plane was at Ohio State and every time it’s such a rush. I’ve loved every second of my experience here,” said Deemer about his involvement in the Flight Education program.

Deemer has a busy schedule and a lot of commitments to balance, but having a daily routine makes things easier. A typical day in Deemer’s life looks like this: flying in the morning, then heading home to eat and do school work, band practice for a couple hours in the evening and finishing the day at home with more studying or work. Although his dual obligations can be overwhelming at times, Deemer wouldn’t change a thing— his roles complement each other to make him a better leader and student.

For Deemer, there is more of a connection between air transportation and drum major than you may think – both require a lot of maturity and responsibility.

“With air transportation, you are in charge of an aircraft and are trusted to keep yourself and others safe. With band, you have a lot of responsibilities and many people are looking up to you, so you have to think about every action,” said Deemer.

Throughout this unusual football season, Deemer is marching to the beat of his own drum not only to lead the band, but also in preparation for takeoff in his career in aviation.