For the first time in its history, The Ohio State University Airport has logged the most takeoffs and landings of all airports in Ohio for a single month. The unprecedented milestone was achieved in back-to-back months during summer 2020.

“We are proud to announce that KOSU was the busiest airport in the state of Ohio measured by aircraft operations in the months of June and July,” said Airport Director Adam Wolf. 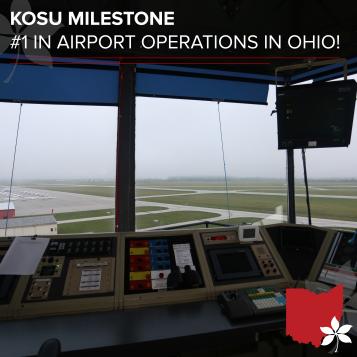 The official tallies recorded by the Air Traffic Activity System (ATADS) were 10,447 operations for June and 10,701 for July, with KOSU leading the way by a significant margin. Not only did KOSU have the greatest number of operations in Ohio, it was also eighth highest in the Great Lakes Region.

The landmark was especially celebrated by air traffic control tower staff, who safely guided each of the operations. “What an exciting time to direct air traffic at The Ohio State University Airport,” said Deral Carson, director of Midwest ATC’s tower at KOSU. “I can't think of a better place to do air traffic control. This airport is a place where aviators can arrive and depart in safety.”

Wolf was quick to praise airport personnel for the success. “Dedication from our students, staff and faculty have made this possible and through these trying times gives me confidence that aviation will continue to drive the economy back from uncertainty.”

While it’s been widely publicized that the commercial airlines industry has seen an overall decline during the COVID-19 pandemic, it’s been somewhat less impactful for general aviation and business aviation, according to Stephanie Morgan, executive director of the university’s Air Transportation & Aerospace Campus. General aviation and business aviation are the exclusive sectors of travelers through The Ohio State University Airport.

General aviation includes most flights piloted by civilians outside of scheduled airline service, including for medical transportation, package delivery, law enforcement and pilot training. Flights made for the purpose of conducting business, such as by fractional companies, comprise the business aviation subset.

It’s conjectured that as the COVID-19 pandemic intensified, many travelers on essential business rerouted their plans from commercial airlines to business aviation. General aviation also became a vital means of transporting medical specimens, for which the need has increased during the pandemic.

“General aviation is on fire right now and we are leading the effort to foster this initiative,” shared Morgan. “KOSU provides regional industry members a critical access point for travel. The importance of this role can be seen now more than ever.” 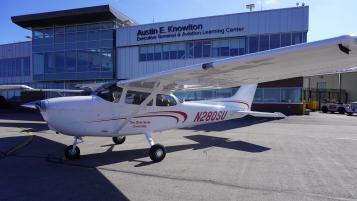 “University flight education programs are crucial to the pipeline of new pilots entering the field,” said Flight Education Director Brandon Mann. “Our enrollment demand has been steadily increasing over the past few years.”

Mann shared that despite closing operations for several weeks in early 2020 due to the pandemic, the training program still surpassed last fiscal year’s flight hours. “Now, with many new procedures in place to help combat COVID-19, we’re back in an upswing and again anticipate record-breaking flight hours over the next fiscal year [July 2020 – June 2021].”

Although not immune to change, aviation remains essential. The Ohio State University Airport is staying true to its mission through the myriad changes imposed by COVID-19.

“KOSU is open for business and we will continue forward in our mission to train the next generation of industry professionals and serve as the premier general aviation reliever airport in Ohio,” said Wolf.