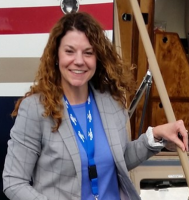 The Royal Aeronautical Society (RAeS) recently elected Airport Executive Director Stephanie Morgan as a Fellow, the highest level of its ranks. As the “only professional body dedicated to the aerospace community,” RAeS “exists to further the advancement of aeronautical art, science and engineering around the world.”

To receive this honor, a Fellow must have made “outstanding contributions in the profession of aeronautics, attained a position of high responsibility in the field and have had long experience of high quality.” Two current members of the society must sponsor the application.

Morgan joined the College of Engineering in 2019 as the inaugural executive director of the Air Transportation & Aerospace Campus. In that role she oversees the strategic vision and operational blueprint for the university’s airport and aerospace research facilities. During her time at the university, she has focused efforts on capital investment initiatives to advance development and operational stability, as well as supporting education and research in the air transportation and aerospace fields.

Before her time at Ohio State, Morgan managed two airports in Idaho and Florida, and gained valuable experience in operations, business development and community relations in various roles at Jacksonville Aviation Authority. She has administered millions of dollars in airport improvements, directed numerous strategic initiatives and worked extensively with airport community neighbors.

A private, instrument-rated pilot, Morgan attended the U.S. Military Academy at West Point and earned a bachelor’s degree in aeronautical administration from St. Louis University. She holds an MBA from University of Phoenix and is a certified member of the American Association of Airport Executives.