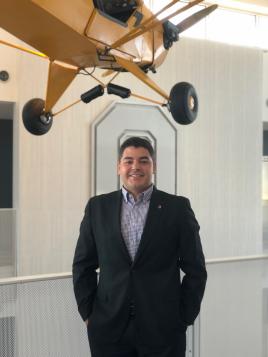 AAAE is the largest professional association of airport executives in the nation, and professional development is one of their stated missions. To obtain this respected designation, Ruiz-Coll passed a written exam, earned his MBA and passed a final interview with a panel some of the best, most experienced airport administration professionals in the country. The final interview covers areas of expertise from Federal Aviation Administration airport certification to transportation and logistics, planning, finance, operations, maintenance and dozens of other topics.

“I offer my congratulations to Carlos on this significant accomplishment,” said Ohio State's Executive Director of the Air Transportation & Aerospace Campus Stephanie Morgan. “The AAE designation puts a stamp of approval on the airport, aviation knowledge and experience he demonstrates every day at The Ohio State University Airport.”

The AAE program was a direct result of military airports turning into civilian facilities after World War II. The industry needed professional managers as those airports began to grow and as a result, the program has evolved into a well-respected and recognized accreditation program in airport management.

The Ohio State University Airport is the third busiest in the state, leading FAR 139 general aviation airport and world-class facilities tailored to innovation research across multiple fields. The Ohio State team is dedicated to delivering exceptional education, research, flight training and research and development services, aimed at supporting the large and growing aviation and aerospace industry in Ohio and throughout the country.