Student dreams soar with support from alumni and friends 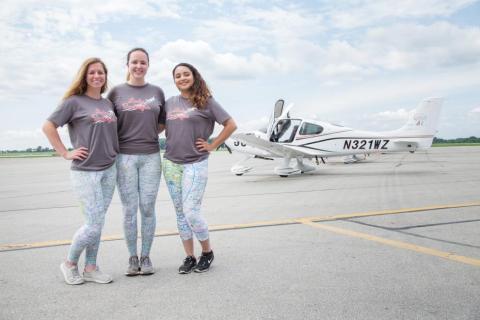 Aspiring pilot Yasmine Abu Arab knew she wanted to study aviation at a big school with big opportunities and in June 2018, she got the chance of a lifetime: flying in a cross-country competition just for women aviators. Thanks to the gifts of many Buckeyes, her flight was cleared for takeoff.

Abu Arab and her teammates from Ohio State’s Women in Aviation chapter competed in the Air Race Classic, the nation’s oldest and only airplane race for women pilots. The unique competition—which tests piloting skills and aviation decisionmaking— spanned four days and 2,656 miles, beginning in Sweetwater, Texas, and ending in Fryeburg, Maine. More of a rally than an actual race, teams battle against their own predictions of time, weather, gas mileage and performance. Out of 55 teams, the Lady Buckeyes finished seventh overall and second among collegiate teams—soaring above their goal of placing in the top 10.

“When you see the pictures of our three women who participated, there’s no mistaking the joy, the pride and the competency on their faces,” said Center for Aviation Studies Interim Director John Horack. “They are the incarnation of the quality experience that students are getting here at Ohio State.”

It’s an experience that might never have left the ground had it not been for the support of alumni and donors. Although the team did fundraising of their own, they received $5,000 from the College of Engineering Priority Fund to help cover the costs of gas, oil, plane maintenance, hotels, food and equipment. More than 1,400 alumni supported the fund, demonstrating that small gifts can add up to make a big difference.

“A lot of the resources from our priority fund come from people who give $25,  $50, $75 or $100—whatever they can. The power of even a small gift is that they’re connected and leveraged with other gifts to directly create this kind of positive outcome for our students,” said Horack.

And while the Lady Buckeyes did earn medals for their achievement, perhaps the biggest reward is being able to inspire others.

“One of the most important parts to me about the race is representing women in the field and hopefully encouraging young girls to join as well,” said Abu Arab, who graduated in May 2018. “I really love this industry and I really love flying, and I know a lot of people are discouraged at the start because of the demographics of the field. I would love to see it grow during my time in the industry and I think this air race is a really great way of doing that.”

Horack agrees, noting that seeing female pilots compete on a national level can serve as an aspirational tool for younger college students and high schoolers who are considering a similar career path.

“Aviation is for everybody, whether you’re a man or a woman or what your background is or where you come from,” he said. “Ohio State is a place where you can dive in, engage, be productive and contribute.”

This story was originally published in the 2017-2018 issue of Forward, the College of Engineering's giving impact report. Read more giving stories and the full report online.